Words don’t do justice to Strasbourg, so this post is going to be very image heavy! We got up and finished packing our bags and checked out of the hotel pretty early that morning. We had to navigate the metro (lots of up and down stairs) with all our luggage to Gare de l’est in time to catch the train at 8:25am. This was one of two times I really wished I had packed lighter. I needed all the clothes I took, but trying to lift my suitcase while carrying my purse and overnight-bag sized carry-on up several flights of stairs was extremely hard to do. Josh helped me most of the time on the stairs going up, or else I’m confident I wouldn’t have made it. Sometimes there are elevators, and if he hadn’t been able to carry my bag up the longest flights, I would have been utilizing the elevators.

We got to the station in plenty of time to grab a pastry and coffee for breakfast. Something I noticed in the train stations was that the Starbucks would have a line a mile long, but the local chains would have short lines and quick service. We skipped Starbucks in favor of the local place and waited for our track number to appear on the departing screens. You are supposed to get to the train station early for TGV trains, but they don’t announce the track number until 20 minutes or so before the train departure time, so don’t expect to go right to your platform. We had an easy time finding our platform, train car, and seats. We weren’t facing each other this time, but Josh and I were right behind my parents in the next row. The TGV train had very nice, clean interior. The chairs came up high above our heads and had comfortable “pillows” at the top to lean your head on if you wanted to nap.

On the TGV train to Strasbourg

On the TGV train to Strasbourg

The shelf above the seats was too small for my carry-on bag, so I had to put it at my feet. We still had more space than your average airplane seat. Our seats were facing backwards, so we had a clear view of the luggage racks where our suitcases were stowed. We all had locks on our suitcases, which is an absolute MUST. I never felt like our bags were in danger of being pilfered, but they would be an easy target if you are facing forward and don’t have a lock. The bathroom in our car was also very nice and clean, with hot water in the sink to wash your hands. At one point my mom and I went back to the attached food car and got coffees. The food car was upstairs and had a nice view and tall counters by the windows to stand at if you wanted to stay and drink/eat there.

The train ride was 2 hours and 20 minutes long. If you aren’t familiar with the TGV, it’s France’s version of a high-speed train. The trip took less than half the time it would take to drive from Paris to Strasbourg in a car. We were going really fast. I purchased our rail tickets online two months before the date of travel. The RailEurope website only allows you to book 60 days in advance, though I was able to book our return segment at the same time. We booked in Comfort class, which gave us seat reservations at the time of booking. I never saw what the economy class looked like to compare.

As we got out of Paris and the sun started to come up, we started seeing snow on the ground. At first it was much like I had seen before in the southern US–a little bit of thin snow in shady spots or frosting the top of the grass. As we went farther north though, the snow got thicker and we were eventually speeding through a winter wonderland. Then it actually started to snow. I wish I could have caught it on video. Being from a warmer climate, I’ve literally never seen it snow that hard, ever. We saw snow covered farmland and forests and frozen rivers and streams. I personally was getting pretty excited. I had hoped we would get snow at some point on our trip, so I had my fingers crossed that Strasbourg would be snow-covered when we arrived.

Arrived at our hotel in Strasbourg and we are in a real live snow globe. It's really coming down! We are having a coffee before we brave the snow to see the cathedral.

I was not disappointed. When we emerged from the train station to hail a taxi to the hotel, the snow was swirling all around us. Our taxi driver played Tetris with our bags until they all fit, and took us on another circuitous route through Strasbourg to the hotel. We got there a little too early to check-in, but the hotel had a locked luggage room. We locked up our bags and planned what to do. We decided to try out the river cruise, and we set out towards the cathedral. I didn’t take my Nikon out at all this day because of the snow. It was seriously coming down, so most of my pictures are from my iPhone and some are from the GoPro. 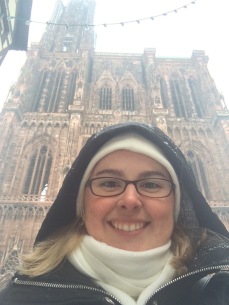 Yes, I know I look like a nun. Whatever, I was warm! 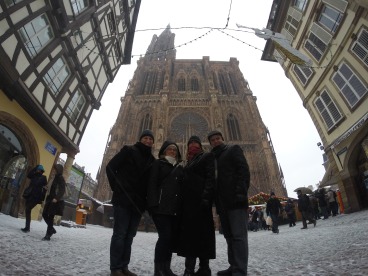 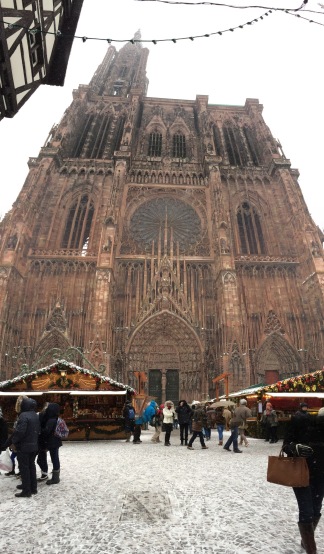 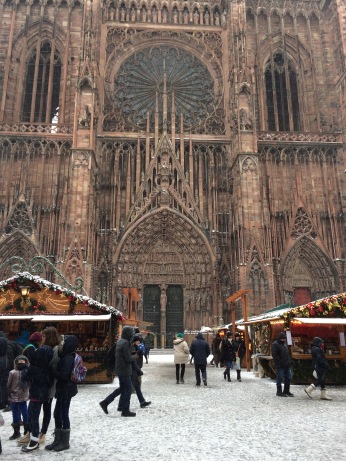 Waiting in line to buy our tickets for the river cruise 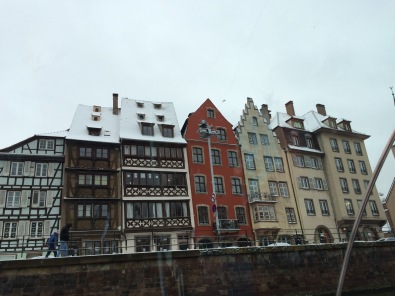 across the bank of the river 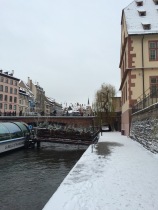 waiting to board the boat

cruising on the river 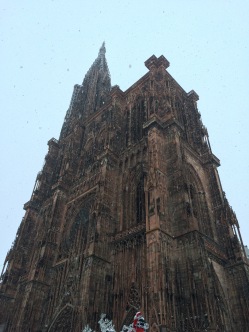 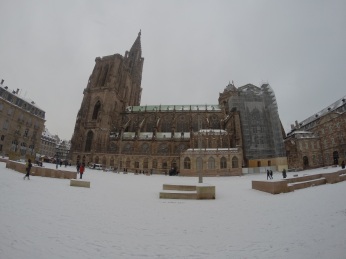 The cruise was warm (enclosed) and relaxing. The headphones were in bad shape, so I ended up using my Beats instead since I had them with me. The narration wasn’t bad, but the warmth and being still nearly put me to sleep. The river cruise is a great way to see Strasbourg and get your bearings. We went up and down a lock system, and that was pretty neat. I would definitely recommend trying the cruise on your first day. You purchase tickets near the bank of the river near the cathedral square.

After the cruise we went back to the hotel to check in. We were staying at the Maison Rouge, which we booked online through Expedia. It was a nice hotel in a great location. Easy walking distance to all parts of Strasbourg. Again we were near shops and restaurants, there was even a pharmacy right below our room. The rooms we were originally assigned weren’t ready yet by the check-in time (well one was, one wasn’t) so the hotel receptionist asked if we minded being on different floors. We did mind. We said it would be ok to check-in to one room while we waited on the other to be cleaned, but she said it was ok that she would move us. We got our keys and went upstairs to find that our rooms shared a wall, but one room was part of a set of connecting rooms that shared a private hallway, while the other room was outside the shared door. This meant that my parents couldn’t actually knock on the door to our room because there was a locked door to the hallway between us. It was very strange. We asked the front desk if there was another way, but ended up keeping our rooms here and just sticking a shoe in the hallway door most of the time. Our room was also on a corner of the hotel (great light and windows!) and had absolutely no wireless internet connection because of it. We did love the room though. Ours had a gigantic soaking tub and double vanity. There was ample floor space in the bedroom, and we had three sets of opening windows. The shades could be drawn with an electric switch on either side of the bed. There was something weird going on with the lights though, as they couldn’t be controlled from the bedside switch and were pretty much either all on or all off, controlled by a switch just inside the front door.

After check-in I needed a nap. This is the last day I remember feeling bad from my lingering cold. My parents went back out to walk around a bit and met us back at the hotel in time for dinner. At check-in we asked the hotel receptionist to make us  a dinner reservation. She recommended A la Tete de Lard on Rue Hannong and got us a reservation for 7pm. We walked to the restaurant since it wasn’t very far away. The waitress greeted us at the door and led us downstairs to a larger dining room. The tables were very close together and we had a hard time squeezing in once the other tables filled up. My mom and Josh both ordered tartes flambees, which is kind of like a thin flatbread pizza, but it has creme fraiche instead of regular cheese (and no tomato sauce). My dad ordered traditional choucroute (sauerkraut). I ordered tartiflette au munster, which might be the most amazing thing I’ve ever ordered in any restaurant, ever.

my tartiflette with mom’s tarte flambee in the background

It was potatoes and munster cheese with bits of ham/bacon and it was absolutely the most delicious thing I ate in France. I need to add this to my list of things to learn to cook. It really shouldn’t be difficult to replicate. I’m sitting here typing this at lunch time and this is making me so hungry!

After dinner we wandered our way back towards the hotel, stopping to take pictures of the Christmas lights that hung from every available surface. We walked back to the square around the cathedral and purchased vin chaud from one of the vendors at the Christmas market. The city does special plastic cups for vin chaud and the markets that are redeemable for 1 euro if you return them. We eventually made our way back to the hotel and called it a night. 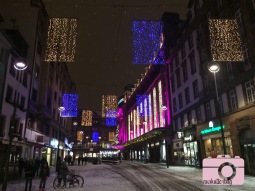 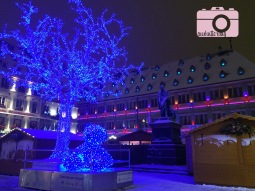 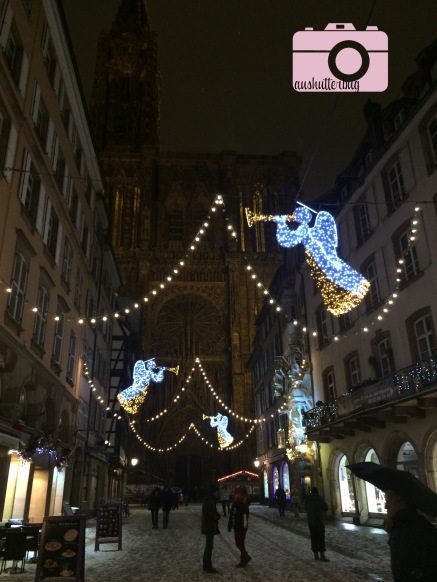 Next I’ll post about our full day in Strasbourg. We ate and ate and ate, visited Christmas markets, and witnessed the astronomical clock presentation at the Notre Dame de Strasbourg Cathedral.