We wanted to see the astronomical clock presentation at mid-day, which requires being in line before 11:30am. We didn’t want to leave the hotel too early, as nothing really opens very early anywhere in France. Once we were all dressed and ready, we walked around near the hotel looking for a bakery for breakfast. There was a little place facing the Place Kleber, so we popped in for croissants, orange juice, and coffee. This place had the most annoying automatic door that would open anytime someone walked by, which let in the cold air and left me freezing!

After breakfast we walked towards the cathedral square. There were already two people in line, so Josh and I went ahead and got in line on the steps behind them. It was snowing pretty hard and I was glad to have my umbrella to keep dry, though using an umbrella while standing in line on steps is kind of tricky and I know I hit some people who stood too close. Oh well, I was dry and it wasn’t intentional. Mom and dad met us back on the steps after walking around for a little bit, and we watched the guys inside the gate clear away the snow from the entrance. Once the gate opened, people holding Strasbourg city passes were allowed in first. We then entered the gate and went to the side to pay the entrance fee. It’s 2 euros per person.

We were some of the first people inside the cathedral for the clock presentation, so I took a few pictures before we were crowded in. The best view is probably from the back wall, but I’m not really tall enough to stand behind others so we stood to the side near the pillar of angels. We didn’t have an easy vantage point for the video they show at the beginning, and the movement at the top of the clock was a little hard to see. I’m not sure it would be much better from the back, but if you’re tall enough I’d recommend standing against the back wall anyway. It’s a little tiring standing there for so long. We were inside at 11:30am I think, and the clock doesn’t move until 12:30pm. They do a little video around 12pm, but you’re still standing in the cold church on the concrete floors for over an hour. The clock presentation itself is pretty short. About 2.5 minutes according to the video recording on my phone. The video is presented in multiple languages (though not every scene is translated into each language) and tells you the high points of what you’ll see in the presentation. It’s definitely worth seeing, and make sure you’re there early to line up. The line grew behind us for a long, long way. I would also read up on the astronomical clock before you visit. It’s astonishing that it was built so long ago and still works (very accurately). It has been rebuilt twice since the original clock, but the current version was built in the early 1800s. 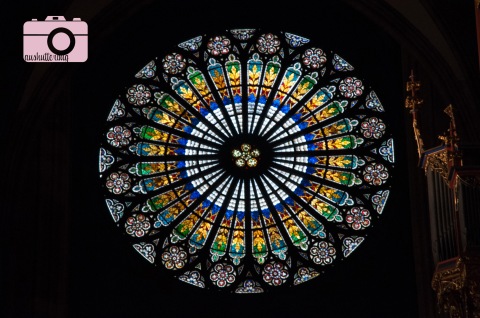 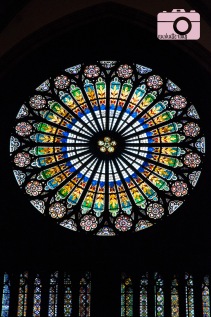 Mom thought to take a picture of the pillar of angels

dad got a better view of the clock from farther back

After the clock presentation you can stay and see the rest of the cathedral. We wandered around and took pictures of the rose window before our (my?) loud stomach growling forced us back out into the snow. We went in search of lunch, but the restaurants we tried were either closed for the holidays or full for the lunch seating. We stopped in at the hotel to ask for a recommendation. The first place recommended was one we tried but was full. They gave us another recommendation for a place not far away, so we set out in hopes that we could get in. L’Alsace a Table was not full, thankfully, and we only waited a few minutes for a table. I want to say I ordered from the prix fixe menu, but I couldn’t tell you what I ate. I know it was good, and I know I was stuffed afterwards!

We set off to shop the Christmas markets after lunch. We may have stopped by the hotel first, but we pretty much spent the rest of the afternoon going from one market to another. The ones near the cathedral were more “touristy” so we grabbed a Christmas Markets map and branched out away from the cathedral square. We had some luck at the markets in Petite France, but those were small and didn’t have much selection. We finally made our way to Place Broglie and hit the jackpot. THIS is the Christmas market I imagined. Huge, long rows of booths filled with Christmas ornaments, food, candies, and handmade items. We walked up and down every aisle and stopped to ooh and ahh. This is where I found many of the souvenirs I brought home. They even had bathrooms here, and I found them to be clean. I think we dropped a .50 coin in a basket here, or maybe we paid to enter? My memory is fuzzy, but it’s always good to keep a few coins on you just for this very reason! The vendors of the market stalls were friendly. Most of them would speak to us as soon as we paused or approached. They didn’t speak any English, or pretended not to, but I was comfortable speaking French to them. Prices were displayed on each item and it was easy to exchange money for items without much conversing. When we stopped to look at these really neat metal sculptures, the vendor didn’t try to speak to us but watched us pretty intently. We were so impressed with the sculptures that we were laughing and pointing to each one. “Oh did you see that one?!” My parents finally decided to buy two that I can only describe as a suit of armor for a wine bottle. The one they liked best looked like a French soldier, and they bought us one that looked like an aviator. Once they decided to buy, the man started speaking to them in English! I thought it was funny that he had watched us and listened, but never spoke up as we were praising his work. One note about the markets, the market in Place Kleber (nearest our hotel) was dismantled on this day because of a farmers market that took place the following day. I don’t remember actually seeing a market at that location, just the aftermath and clean up. 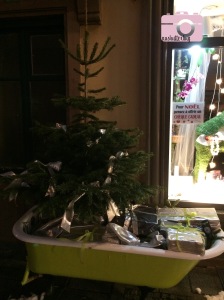 Tree in a bathtub… Oh Strasbourg.

More pretty Christmas lights around every corner in Strasbourg

We had another dinner reservation made by the hotel for this evening. Le Baeckeoffe d’Alsace on the Rue des Moulins. I had looked up what Baeckeoffe meant, and found out it’s an Alsatian casserole-style dish. Since it was obviously the house specialty, we all ordered baeckeoffe. I had the duck version and it was absolutely to die for. We realized after our food came that we easily could have shared two between the four of us, but we just kept eating until most of the food was gone. We had an interesting waiter experience here. It was a younger girl who seemed to me a little hesitant to wait on English-speakers. We had been in France for over a week and in Strasbourg for two days, so we were doing pretty well at ordering in French. She took our order, brought our food, and then wouldn’t return to our table. The people next to us finally gave up on her and took their check to the front to pay. We had to wait quite a long time to order dessert, which was included in the “formules” menu we ordered from. Then we had the same issue as the people beside us and couldn’t flag her down to pay. It was really odd and I even saw her sitting down near the hostess stand at one point, so I know she wasn’t just extremely busy. Overall we enjoyed our experience and just chalked it up to (picture me shrugging) French dining.

We called it a night soon after dinner. The hotel had a little bar in the lobby where we ordered drinks and sat on comfy chairs, but after a day of walking we didn’t last too long. We also had to pack up and prepare for our train ride back to Paris the next day. That means coming up in my next post I’ll talk about our second hotel in Paris, our quick trip to Versailles, and New Year’s Eve!